Jinny Beyer means quilts. Quilts and patterns. Operating out of Virginia in the United States of America, but famous world-wide. Ask any woman.Try a google search if you are curious.

It all started back in 1972, when she was in India and Nepal, but this is a fascinating story which is not about quilts at all, but about amateur radio.

A few years ago, I found one of her QSL cards - see below - from when she was in India, and it aroused my curiosity. Well, she was what you would call a good looker... 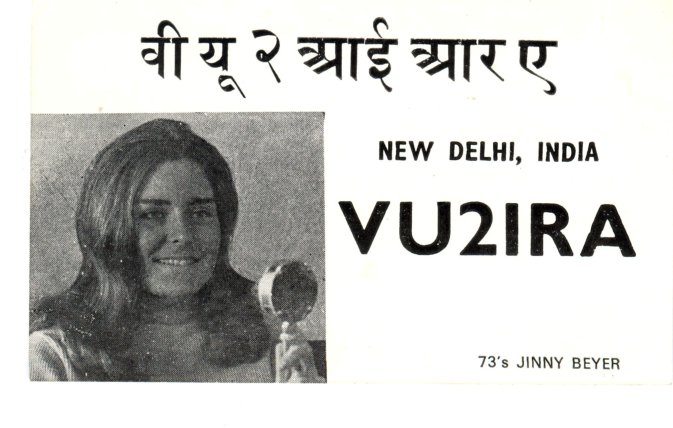 I became a ham when I was just 13. At that time I was K6RQB, then became W4IDG. After I returned from India, I remained active for a while, but then I got so busy with my quilting business that the next time I moved, I didn't put up a tower and unfortunately I think my amateur radio days are over. Wow! for interesting QSL's I think I still have the one King Hussein of Jordan sent to me.

I originally got interested in radio from my father; he was one of the first ham radio operators, in the early 1920's.

A few years after I was married my husband got a job in Nepal, and right after that in India. That is how we came to live there.

The 9N1RA story is much more interesting than the VU2IRA - when I was in Nepal I was known as 9N1 -Raggedy Ann and when we moved to India I just asked for VU2 - "India Raggedy Ann".

My husband and I and our two young children went to live in Nepal in 1970. I had been an active ham in the States and I wanted to get a license in Nepal. I knew the only other ham that had been licensed was Father Moran (9N1MM). When we got there I metFather Moran and he told me it would be difficult probably for me to get a license. Meanwhile he let me use his radio some. Every week I would diligently go to the Communications Ministry asking how my application was going. Each time I would be told "it will be coming soon, we are working on it." This went on for almost sixteen months and we were only to be there for two years. My husband was working in the Ministry of Economic Development and they really liked his work and were asking him if he would stay another two years.He kept putting them off because he felt it was best to move on to another position.

Well, one night we were at a party with a lot of Nepalis. One of the Nepali men came up to me and asked, "your husband is not sure about staying in Nepal for another two years. We think it is maybe you who does not want to stay. Are you unhappy here?" I took this as my great opportunity and proceeded with a big sob story about how I couldn't talk to my family, how I had been trying to get my radio license ever since we came and hadn't been able to get it and if we went to India I would have no problem.

Well, the very next week my parents came for a visit. I told my father that he might be interested in my weekly trek to the Communications Ministry to see how I was getting the run-around all the time. We went into the office, I told the man I was once again checking on the status of my license and he handed me an envelope, gave me a smile, and said "here it is".

Long distance phone calls took more than a week to set up and even then they often didn't happen.